Is your rent right?

Use the form below to find out

Co-Living is A New Approach for Renters 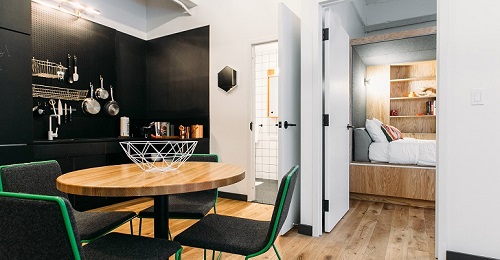 What is co-living? Briefly, it is housing built with larger common areas and smaller private spaces in exchange for lower rent. Often, the leases are month to month or short term. A sense of community goes along with the whole experience - it's not just renting space. Co-living is renting a lifestyle, a mobile lifestyle.

Right now, co-living is in its infancy. Spurred by the co-working phenomenon, and an oversupply of new rental construction in major markets, co-living is increasingly attracting young and mobile tenants who may not be looking for long term rental homes, but need to live near their workplaces in various cities, or can work with mobility and want to travel.

The dominant company in co-working is WeWork, with 100 locations in over a dozen countries. They launched a co-living project, WeLive, in Manhattan and in Arlington, Virginia. But right now, their planned communities in Seattle and Jersey City are on hold, as they take time to evaluate their strategy for growth.

Other companies developing co-living properties include Roam and Common. Common most recently launched their largest project, Common Baltic in Brooklyn's Boerum Hill. They were surprised to find that the units rented for the same as regular market value. With had 70 co-living beds and 67 studios and one-bedrooms, the project is attracting young tenants who desire their urban living to be more than a place to sleep and cook. They want to be part of a community, and be connected to the city at large, without the strings of a traditional lease.

Roam is selling an opportunity to sign one lease, and travel and live around the world. For the working nomad, this is a dream come true. They have locations in Miami, Ubud, Madrid, Tokyo, London, and Buenos Aires.

Another company with 10 co-living projects in its pipeline is Ollie. At present, they are developing what they call the biggest co-living project in North America in Long Island City, New York. Ollie will manage floors 2-14, and co-living renters will have access to the type of higher end amenities that are expected in newly constructed high end New York City apartments.

Co-living is a different concept from the "workcation" communities that have developed recently, such as Nomad. These companies sponsor trips in locations where participants can live in a communal property, working, networking, sightseeing, and exploring. Rather than a coliving opportunity, these are opportunities to travel while working and networking.

The way we live and work today is undergoing fundamental transformation!